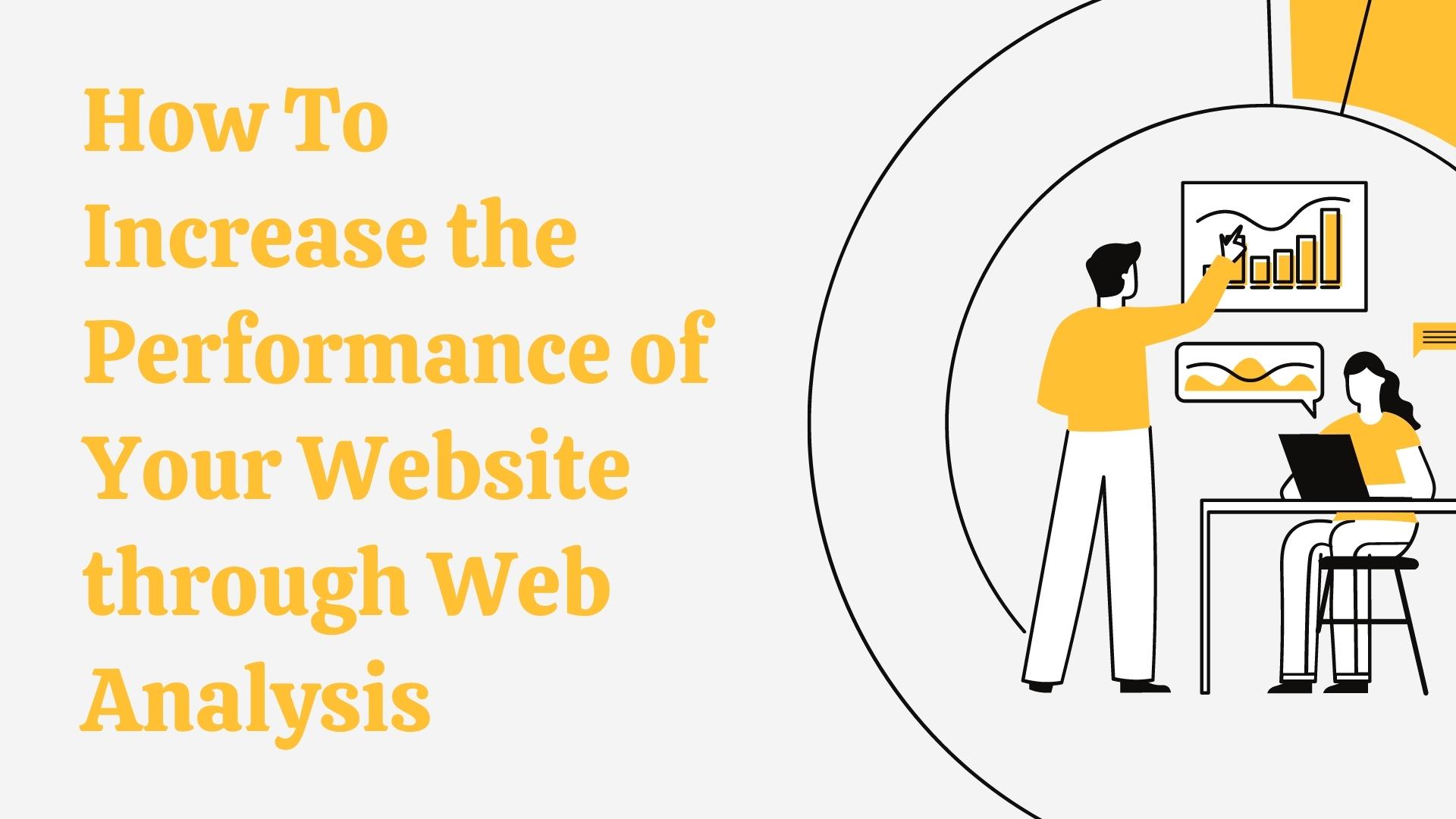 Who does not want that? The website has been optimized here and there or even completely revised. The content is up to date, the employees full of expectations after the (re)launch.

The website gives everything to ensure the company’s success to heat up. Maybe it has been delivering constant traffic for years, even without revisions.

But somehow disillusionment sets in at times. The first questions come up:

Does it help us generate conversions?

The website looks great and offers – supposedly – great content, but does it really do something for the company’s success?

Most companies that have a website make the same mistakes: Above all, there is a lack of a really effective strategy on how to make it more successful. And the possibility of expressing this success in figures. And precisely because there is nothing measurable, the doubters in the company often begin to raise their voices. If anyone notices it at all…

Web analysis can be a real savior at this point. Because when it comes to deriving valid success from a gut feeling, there is no way around data. And web analysis tools such as Google or Adobe Analytics provide them.

Assuming you know what you are doing.

Even if it seems strange at first not to start measuring on your website immediately: If you want to measure the success of your website or specific parts of it, you will first of all you cannot avoid naming it. Because without clearly defined goals and the associated meaningful key figures (so-called Key Performance Indicators, KPI for short) no one in the company will be able to name the success of the website in the long run.

The difficulty here, however, is often a certain “operational blindness”. Unfortunately, the development of key figures is not trivial. Most misunderstand it; For example, turning the numbers that Google Analytics shows into so-called KPIs, such as impression or user numbers, bounce rates, clicks, length of stay, etc.

Why this is wrong is automatically derived from the definition of key figures. Because from a business point of view this must be related to the success of the company to have. And honestly, I haven’t come across a really successful company whose “leading metric” was any of the above. Or they were far below their potential.

A meaningful action is derived immediately from the change in a KPI. If it isn’t, it’s not a KPI.

It’s as simple as that.

So what do we need instead ? Performance-related metrics. Yes, also for content. If possible, even those that can be expressed in euros, such as “customer value” or something like “cost per new customer”. Lead-driven companies can also attach a euro sign to won leads – at least as an average value per lead, but better as a dynamic value, depending on the lead quality achieved.

Only in this way do lead numbers acquire a quality – and only then can we show which type of lead should be increasingly sought or advertised in the future.

It’s worth thinking about a lot more than meets the eye. Because only then will measures such as conversion optimization, channel optimization or the like work at all.

Stupidly, there is no blueprint for key figures. Although I am often asked which ones make sense in this and that case, I usually point out that this depends to a large extent on various aspects that are difficult to assess from the outside.

KPIs are actually dependent on, among other things, what a company is aligning itself with. Anyone who has ever spent a day with me in the “KPI Bunker” knows what I am talking about. ^_^

Tools do not (yet) do any analysis for you.

Now that we have key figures, it’s about reading the web analysis tool exactly what we as have to do next.

The tool should tell us what our next steps will be?

Here comes the next error: A web analysis tool only shows numbers. What follows from this is initially up to you and the company. You will only find out whether you find the numbers that the tool throws out good or bad if you (yes, YOU) put them in the context of your goals.

So it’s not about following any industry benchmarks in the sense of “Competitor X has Y bounce rate. We have to get better.” Rather, it is important to always get a little bit better based on your own numbers.

That sounds strange, because we keep hearing, which numbers others supposedly achieve – and many then try to orientate themselves on them.

Not every number in web analysis tools has a meaning.

Yet I always preach another way:

Become the best version of yourself with your business, your website. And not the best copy of a competitor.

For this it is essential that you (and your colleagues) the data from the tools understand fundamentally – their meaning must be perfectly clear to you. Only then can you say whether you “like” a number or whether there is room for improvement on the website.

What does “get better” mean in that sense? Essentially, all you have to do is figure out the next steps for the site based on your current numbers. So: Which development on the website do you want to influence? And then measure whether the website has actually come closer to its/your goal after the change.

How exactly an analysis of the situation in your case looks like depends on what questions you want to answer. In any case, the fact is that at the end of an analysis of figures, a recommendation for action for the future is determined. Ideally, an analysis should only be able to be signed by the decision maker to whom it is presented with “Yes” or “No”.

Please note that a recommendation for action always contributes to the website goals. It doesn’t do you any good, for example, to generate any kind of internal clicks to a specific page while ignoring what that landing page is for in the first place (e.g. to generate sales).

In addition to non-existent goals, another construction site that many companies are nibbling on is data quality. Companies often suffer from high deviations between the numbers from the web analysis tool and, for example, the backend. Or wrong or incomplete implementations of web analysis systems.

The basic rule is: deviations between the systems are OK.

Because both systems measure differently and can be influenced differently – negatively. Web analysis systems suffer, for example, from ad blockers, browser restrictions (e.g. ITP in Safari or ETP in Firefox) and their influence is constantly increasing. However, the deviations in this regard should not exceed a certain magnitude.

It is more important that you use your analysis tool or the comprehensive web analytics put the system to the test on a regular basis, for example with the help of website audits (some people also refer to this as website check or SEO check, but these terms are a bit misleading in my opinion). After all, who wants to provoke decisions with low-quality data?

For example, it is possible to count the number of conversions reported by a web analysis tool , with those from “reality”, i.e. the backend of your shop system. If there are major deviations here, it is advisable to put the data quality of the web analysis tool to the test.

Focus on yourself! Less is often more…

We humans often fall for that so-called “Shiny Object Syndrome”. In other words, the urge to look at something new that comes into our field of vision. We are fundamentally constructed to be very curious.

Especially when it comes to web analysis data, we often find something “interesting” – and want to understand what specifically behind the data. How many users have seen or read our content? How do users of our website tick in certain regions. Why did certain users do something or not?

However, a lot of such data is often not expedient for us, which is why I also regularly and urgently advise against collecting more and more data – especially if it would only be “nice to have”.

It’s more about looking at data with a certain focus; To limit oneself to a few data, but to follow them up intensively. And that on the basis of the right questions.

The (second?) basic rule applies anyway: Do not collect any data for which there is no meaningful question exists!

Due to the usually scarce resources in companies, there is often no other choice anyway. If you are not busy with data analysis 24/7, you should deal with less rather than more data when it comes to data – but use it as intensively as possible.

Especially in the “learning phase”, in which a company learns to understand how to deal with the data, it is of little or no use to undertake several projects and optimizations at the same time. For each individual, hypotheses and recommendations for action must be generated, changes must be implemented and tested on the website, and a summary must then be drawn as to whether the change was successful or not. And then the whole thing all over again.

For a content project, for example, this could mean becoming clearly aware of the goals, these to make them measurable (content KPIs) and to determine them based on them whether everything is in order or whether improvements need to be made. And then do it!

The web analytics process: every step of it is important

If you don’t learn to carry out these steps one after the other or if you maybe even change several things at the same time on the website, you will make mistakes.

For example, multiple changes being tested at the same time can (negatively) affect each other – if not implemented in isolated areas of the website.

To this end, develop routines that will become more and more part of the company’s culture in the medium term (keyword: “Data Thinking”).

Actually, a web analytics process is anything but as trivial. But once you have committed yourself to it, you understand that it is negligent to try to “improve” something without data.

So for everyone who, after creating a website or content, thought they could leave it now, here’s the bad news: In theory, data can still be used to improve things afterwards.

Because the real high is in you then when you can prove improvements based on data and real success sets in! How many times have you experienced that…?!

The most important take-aways for web analysis

Raise no data for which there is no specific question relevant to business success. Measurable goals are the be-all and end-all, also for web analysis.

Use the data to actively bring about changes – for example with a view to the design of your website or the targeting of your advertisements.

Remember: Tools don’t do analysis for you. They just make them easier and are only as good as the data on which they are based. Therefore, always check the quality of your data.